The Result Of Hindi Heartland – A Precursor For 2019 Lok Sabha Elections!? 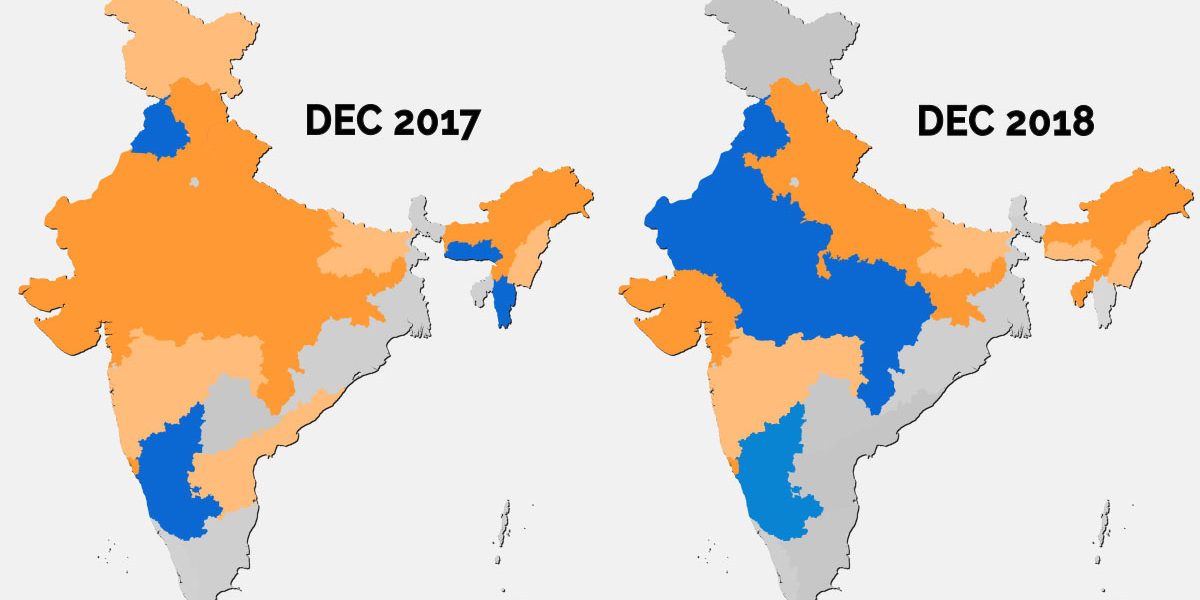 With the innumerous problems related to farmers, unemployment, institutional chaos (CBI, RBI, education, and Supreme Court), law and order disruptions (lynchings and mob violence), the present regime is destined to suffer a loss of major vote bank in the upcoming 2019 Lok Sabha Elections.

The results of the three main Hindi States- Madhya Pradesh, Chhattisgarh and Rajasthan– suggest a positive change with respect to restoring democratic structure of the country, thereby reducing the hegemonic dominance of majoritarianism of one political party. Indian National Congress (largest party in all of the three states) had a satisfying and boosting victory in these elections.

One of the reasons for the loss of BJP as speculated by political experts is the discontent among the masses over non-delivery of promises made way back in 2014, such as employment generation, reduction of poverty, and so on. What actually happened so far is that the rate of educated unemployment increased due to the low quality of jobs offered in the industries. The long march led by the farmers across India with the demands of loan waiver among various issues remain unaddressed under the Central Government.

Apart from these issues, my point here is to articulate these assembly elections to understand the complexity of the future developments in Indian Political System which are just around the corner.

While states like Chhattisgarh and Rajasthan have given clear-cut majority to Congress, Madhya Pradesh sets a perfect example of diversity and close competition among the two main parties- the INC and BJP. Both the parties, BJP – against anti-incumbency, and INC against 2013 loss, have gained an equal number of seats. This distribution, however, is crucial to understand here as it serves as democratic ground in an atmosphere where the culture of debates and discussion, arguments and the notion of ‘agree to disagree’ have been lost somewhere due to the majority of one party. When the laws are made or any new constitutional development takes place, it’s important for the MLAs/MPs to have a healthy discussion to lead to a positive conclusion and not basically on majoritarian whimsical order. To understand this, we need to go back to the foundation of our constitution, which took a number of days and proper discussions with differing viewpoints/opinions, which ultimately established the constitution of India. Therefore, it is important for a country like India, who is very diverse and vast in her form, to have representations from most factions of the society to make it more inclusive and democratic.

In Madhya Pradesh, the BJP Government has gained immense popularity since fifteen years of rule and governance. A number of schemes and development policies were initiated. But in a course of time, BJP portrayed its anti-people stance since 2014 when BJP took hold of the centre too. The vyapam scam (related to education and recruitment) has shown the worst side of Government. It affected the youth aspiration for employment and created an atmosphere of distrust against the ruler.

The next thing that came is the case of ‘Mandsaur’ violence where many farmers have been brutally killed for agitating against the policies of the Government. These issues, along with farmers’ distress and divisive politics, have created a resentment against BJP Government. Therefore, the results of the elections prove to be in a positive direction to make parties understand that the public is most powerful in deciding the fate of any political party. Also, once the limit is crossed, leaders do not remain in a position to manipulate the minds of the public.

ISSUES AND CHALLENGES FOR 2019 POLLS –

There are many issues to look upon before the general elections for the ruling party as well as the opposition. Perhaps, these issues are for a greater concern for the ruling party while the opposition must take forward and present the concerns to enable themselves in order to influence the public with a good and issue-specific manifesto. As a result of propaganda created by the BJP in the name of Hindu-Muslim Politics, Ram Mandir aggressions, and politicisation of the Sabrimala verdict (all comprising religious debate), the very people of India are frustrated and want answers of real/practical developments. Agrarian distress; marked by the debt on farmers, non-delivery of minimum support prices as promised by the Government, loss due to sale of their crops at lower prices than those prevailing in the market and such; is the central topic that need to be dealt with for the parties thinking about forming Government. Apart from these, another significant issue that came forward during the farmers’ movement is the appointment in APMC Mandi’s, where those in power do not possess any knowledge related to farming activities but merely gained positions due to having a contact with the ruling party.

Recent crises in Central Bureau of Investigation and Reserve Bank of India also put a dilemma in the working of BJP Government and their maintenance of these important institutions of our country.

According to “The Wire” news article, the reason why BJP Government is losing is because of its inability to tackle the agrarian crises, an enormous rise in NPA’s of banks, economic costs of demonitisation and GST, and unemployment. Therefore, the challenges for both the national parties is to lay their emphasis broadly on the above said issues.

While one notes of a major change in the political development of India at the present scenario with few months left for general elections, the case, however seems unclear. Keeping pace with the people’s mandate, it’s highly unlikely for any of the national party to get clear majority. The case, as I think, would be just like Madhya Pradesh if there seems to be competition between national parties. However, if the National party like INC makes an alliance with the regional parties, sheer chance of change in Central Government is possible. The change, however is also filled with confusion as there are differences in ideology of political parties. For example, the ideas of Congress are more inclined towards secularism and liberalism. Thus, an alliance with Bahujan Samaj Party, which is more inclined towards the emancipation of Dalits and minority groups, could be difficult. But the common cause of all regional parties at present is to remove the BJP Government from the Centre, which could help the regional parties with distinct views to make a coalition with Indian National Congress.

Ultimately, they are opposing the dictatorship-like-ideology and Hindutva Agenda. Hence, ideological background of regional parties would not serve as a hindrance for making an alliance. The rest lies with the days counting and the people’s mandate. Whatever be the case, it’s the citizens of India and democracy that win. The issues as suggested throughout the article would play a significant role in deciding the political structure of the country. It is time to look beyond the communal and divisive politics, viz; the Hindu-Muslim debate.

Also, it is possible that the results of recent assembly elections could be repeated in the coming general elections with a change in ruling party or neck-neck competition like Madhya Pradesh.

The whole article is based on the analysis of the results of assembly elections held in the three States of Hindi Heartland and then the speculation for the future elections to be held in 2019. The discontented population needs to be offered with a better and democratic leader who does not spread hatred and fear among the populace. Any Government that wishes to bring hope to the population needs to make a practical manifesto which provides solutions to their problems. Some of the suggestions could be –

(i) To bring an agricultural reform, viz; climate resilient and sustainable farming. This would maintain economic and social well-being of the farmers. Like in the case of Africa, the youth of India should be properly guided to enhance agricultural sector.

(ii) Create more jobs in manufacturing sector and filling up of the vacant government posts to fill up the employment gap.

(iii) Setting up of fast-track courts for crimes such as rapes, lynchings, mob violence, corruption and so forth.

(iv) Increasing the independence of RBI to establish proper checks on NPA’s twin-balance sheet problem for lessening the stress on economy.

(v) Maintaining the proper structure of Central Bureau of Investigation and other Public Institutions for better functioning of the entire system.

(vi) Regaining the systematic law and order entities with independence and for the security of the public (unlike where lynchings take place in front of police personnel).

Thus, it would be interesting to note the changes in the very near general elections. It is important to consider the ill-being on the people caused by the BJP due to demonitisation, Goods and Services Tax, harassment of universities, sabotage of institutions, violation of Fundamental Rights and so on. Despite all the narcissistic politics, is it possible to bring again the positive and harmonious structure of the Country? The question is for all of us to think upon.

The Author All posts

Get Our Articles in Your Email (FREE)

Learn about our new programs for US/Canadian Middle School through College Students!